One Man And His Precious Cow

There was a man with three sons and a precious cow. The man was was very proud of his cow because she gave birth to a healthy calf every year. One day, the man asked his eldest son to take the cow grazing. The son took the cow to the fields where green grass grew and then to the water-hole for a nice long drink. 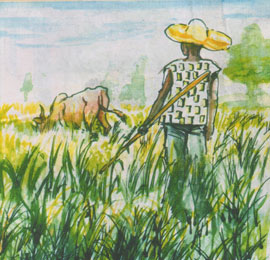 Later, the man asked his cow, “Cow, did you have enough to eat?”.

“Hmm”, the cow replied. “Your wicked son took me to the wilderness where no grass grows. Then he tied me up and went to sleep.”

The man was angry with his eldest son and sent him away from home.

The eldest son wandered through green meadows, parched lands and waded across little ponds until he arrived at a farmhouse. There he met a kind farmer who taught him how to farm in both dry and wet seasons.

The farmer told the boy, “One day I will have to send you back to your father, so you can teach him how to farm. Then he can depend less on that wicked cow.”

Meanwhile, the boy’s father had called his second son. “Go and graze the cow. She must be well fed and washed.” The second son took the cow to the green fields where she grazed. Then he gave her a bath and tied her to a tree to dry. As he waited for the cow to dry, he dozed off. 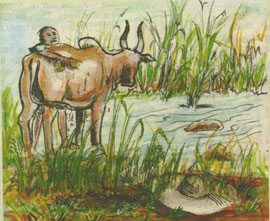 The father came by to see how his cow was doing. “Have you eaten?”, the man asked the cow.

“Hmm”, the cow replied. “Your wicked son took me to the wilderness where no grass grows. Then he tied me up and went to sleep.”

The man was again very angry. He grabbed a big stick and woke his son up. Then he chased him away.

The father had now called his third and favorite son. “Go and graze the cow. Be sure to take good care of her for it will break my heart to send you away like your brothers” he warned his son.

The son took the cow to the green fields where she grazed and bathed. Then he tied her to a tree to dry. Just then the father arrived.
“Cow”, he asked. “Did you have enough to eat?”

“Hmm”, the cow replied. “Your favorite son is just as wicked as his brothers. He took to the wilderness where no grass grows. Then he tied me up here to die.”

The man was very sad to hear this but he wouldn’t listen to his son’s pleas. He sent him away just like his brothers before him. 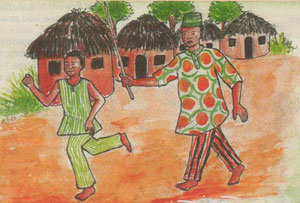 The third son wandered for many days until he reached the house of a great scholar. There he learned to read and write.

The father who was now alone took the cow grazing. He took the cow to a pasture where she ate plenty of lush grass and drank plenty of water while the man dozed under a tree. When the man woke up, he asked the cow, “Are you full?”

The cow laughed. “You’re a hyprocrite like your sons. You took me into the wilderness. You gave me no food and no water. Then you ask me if I’m full?!”

The man couldn’t believe what he heard. “Ahh, you’ve been lying to me all along”, he wailed. “I sent my sons away because of your lies.” He beat the cow with a stick then he tied her up to a tree and left her to die.

The man wandered from village to village looking for his sons but with no luck. After many years, he returned home a sad and tired old man.

One market day, he decided to go to the market to buy himself some food. When he got to the edge of the market, he was tired that he slumped and fainted. People ran to help him. The noise attracted everyone. Everyone, including the eldest son who had come to sell some of his farm produce, the second son who had come to sell the tools he made and the third son who had accompanied his teacher to the market to buy some food. The boys noticed that that was their father who had fainted and at the same time, they found one another. They were overjoyed.

When the old man was revived, he wept with joy at seeing his sons once again. He asked for their forgiveness and pleaded with them to come back home. “My eyes were opened long ago. You are more precious to me than a cow.”